Living in a hotel in Spokane made me feel spoiled. I loved the room I stayed in. The comfortable beds were my oasis through the whole situation. My treat every few days was Starbucks. It was only a few blocks away. People didn’t want me walking but I was going a little bit insane laying around all the time.

Instead of riding the bus to the hospital like I originally had planned, I used Lyft and Uber. The bus made me feel too dirty to hold Paxon.

Sometimes I would be exhausted at night and order UberEATS to the hotel. Life there wasn’t bad, but it was expensive. I watched my bank account slowly drain. Hotel living and eating out every day wasn’t a great way to save money.

From the time Paxon got into the hospital, the promise of being able to stay at Ronald McDonald House for free hung over my head while I counted down the days until I was supposed to check out of my hotel. I’m sure Ronald McDonald was annoyed at me calling every day, but, on top of everything, I always worried about where I was staying next just because I was trying to see Paxon twice a day so I could get the hang of nursing him.

One of my visits to the hospital, I was so excited to see Paxon no longer needed his IV. Everything seemed to be happening so quickly and his health was headed in the right direction. 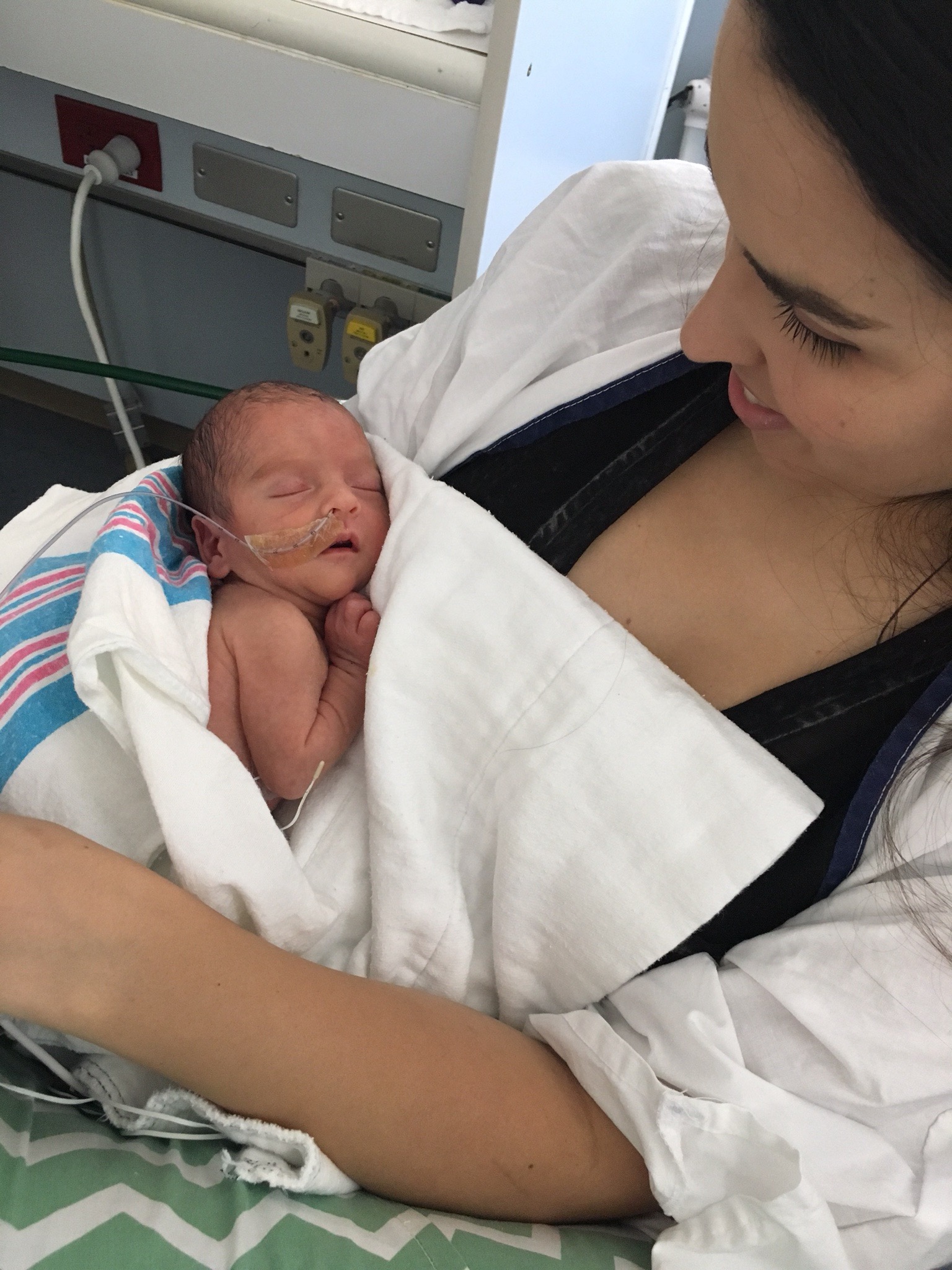 There was a long period of time where the only news I heard from the doctors was that Paxon needed to gain weight. Feeding him was so hard at first. There were things I had to do that mothers of full term babies would never even think of. First of all, he couldn’t eat longer than about 5 or 10 minutes at first. It would exhaust him too much. The rest of the food he didn’t get from breastfeeding, he had to get via feeding tube through his nose. Secondly, I had to watch his breathing and make sure his breaths per minute weren’t too high. He wasn’t very good at pacing himself at first and that’s why it was so exhausting for him. All these things he was having to do, shouldn’t have happened until he was about 7 weeks older. I felt bad he was having to work because my body didn’t have any room left for him.

Instantaneously, my little baby was gaining so much weight. He was born at 4 lbs 1 oz, dropped down around 3 lbs 14 oz and then gained all over again. Each ounce gained meant he was closer to going home.

This week he also got his very first onesie from the hospital. Something about him finally having clothes on made the wires he was connected to seem less harsh. Micah and I both love his skinny little legs.

Just one day after seeing his first onesie, a nurse was changing his diaper and he peed all over and needed a new onesie and bed change.

Back when I used to work at Target, I would see the onesies for premie babies and be unable to imagine a baby that small. Now I have a baby that started off in premie clothes that were too big for him.

It was definitely a week of firsts. Another test premature babies have to pass is being able to keep temperature without the help of an incubator. Being an overachiever, Paxon had it down by week two.

There are so many hurdles to jump over and this little human is taking them on with determination. The promise of a quieter environment and comfier bed is something for him to look forward to.

PNW-based freelance writer and social media manager with too many interests to count but a major love for my son and the environment. View all posts by Cassandra Lee

I was born and raised in Idaho Falls, Idaho but moved to Washington soon after high school. I’ve been here ever since! Writing is my passion and I would love to publish a novel one day. I went to school with astrobiology on my mind, but ended up falling deeper in love with acting and writing. Science will always be a huge love for me, but for now writing is taking the forefront!

I’m a mom to Paxon and Apollo and a dog mom to Bulma. I love Wonder Woman, anime, and playing my Nintendo Switch (Breath of the Wild 2 can’t come soon enough). If I’m not finding an excuse to be outdoors, I’m in the kitchen experimenting.

Happy birthday dad 🎂♥️ this is the longest I've gone with you living so far away and I have to say it sucks 😭 you mean the world to me and I hope you have the best day ever
Happy birthday to the man I get to love forever 😍 you impress me more every year. I can never thank you enough for everything you do for us ♥️
I have a preschooler?!
Four years ago today was the scariest night of my entire life. Ever since then you've found a way to be both the rain and the sunshine in my life every day. Happy 4th birthday, Pax ♥️
Had a fun weekend despite the 100+ degree weather 🔥
Happy Father's Day ❤️☺️