Why I gave 4 stars out of 5 to this hotel is because of the mix ups and way things in the hotel were taken care of. To start with the positive, the hotel is in an amazing location just steps away from the beach and a short walk to any of the main shops in Seaside. We pretty much parked our car and left it for the entirety of our visit. We also got a lofted room which meant we had a loft with chairs overlooking the ocean and we definitely took advantage of that to watch the sun set and listen to the ocean at night because you can open the windows a little bit. The staff even helped us get Micah’s wallet off of the roof below when Pax threw it out the tiny crack in the window when it was opened. The cons, however, were that when I walked up to check in, they told me my reservation had been deleted after I had called the hotel to make sure I cancelled one of the nights I messed up the dates on and changed it to a different date. They, however, were able to rebook the reservation with the room we wanted so there were no problems there. As for some of the fixes in our room, things weren’t really taken care of. I know I said previously I don’t mind an older room – which I don’t- but some of the things in the room were in bad shape and fixed in questionable ways.

The beach in Seaside is so beautiful during summer. We went at the perfect time where there weren’t many tourists out on the beach and enjoyed the view. One of the nights, we tried to start a fire, but it just wasn’t happening because of the wind. It’s definitely a place to go if you want to relax on a sunny day, though. 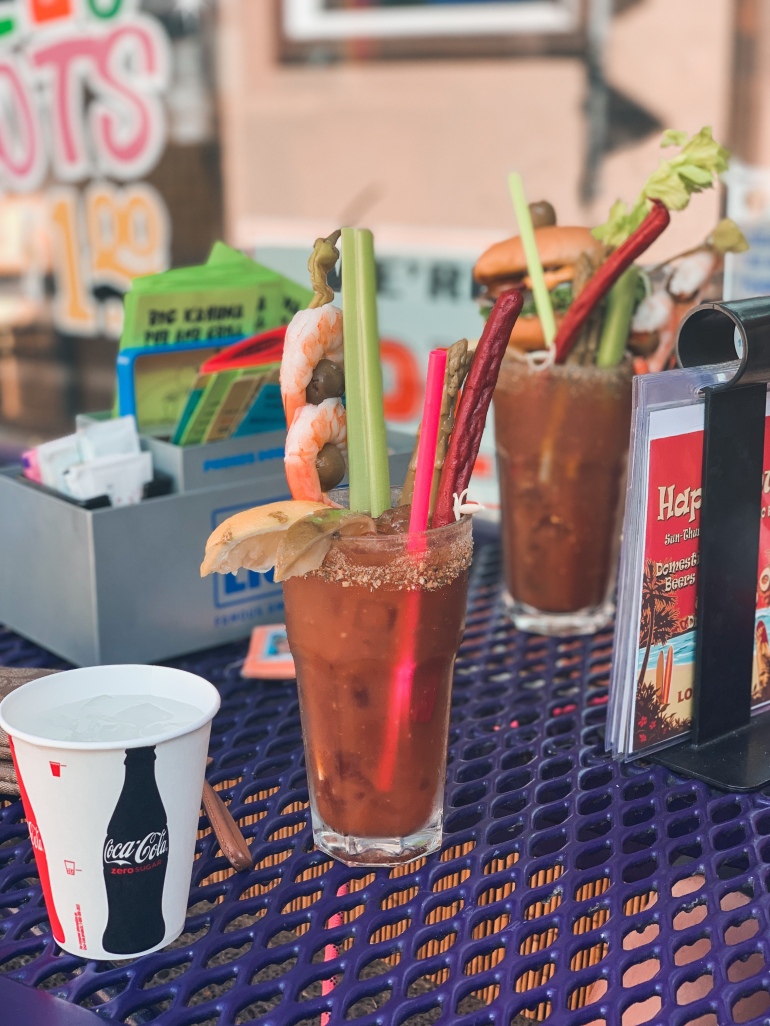 The food in Seaside is unreal. The diversity of the types and accessibility to all of it definitely makes it so you’re never bored. Many restaurants also understand people bring their dogs with them to the beach and offered a wall place outside to eat where your dog can sit under the table with you. One day we ate at Mo’s and had delicious seafood plates and drinks. I had seafood Caesar salad and Micah had the seafood sampler plate. Pax loved the crunchiness of his fried local shrimp. The real star of the show for me was when we ate at Big Kahuna grill (Bloody Mary and salmon sandwich above). They made us these huge Bloody Mary’s, mine was smaller than Micah’s who had a cheeseburger on his and it ended up being his whole meal. I ate a salmon burger with dill cream cheese on it and I don’t think I’ve ever experienced flavors like that before. The fish was so fresh and crumbled while I ate. Paxon had a ham grilled cheese but he kept throwing his food and eating our fries.

Outside at the dog area, Bulma met a border collie friend who she played with for a short time. Micah played a gun shooting game on the street and she almost ran away so I had to hold her because she was scared.

Micah and Pax also bought knitted ponchos from one of the shops that kept them warm the rest of the trip. Perfect items for nighttime.

Over all, our visit was so relaxed and so much fun. I plan on coming back very soon. I also met a tattoo artist while I was there, but more on that later!

PNW-based freelance writer and social media manager with too many interests to count but a major love for my son and the environment. View all posts by Cassandra Lee

One thought on “Seaside, OR” 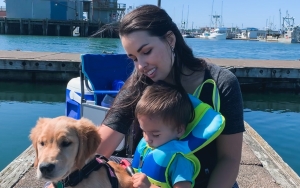 I was born and raised in Idaho Falls, Idaho but moved to Washington soon after high school. I’ve been here ever since! Writing is my passion and I would love to publish a novel one day. I went to school with astrobiology on my mind, but ended up falling deeper in love with acting and writing. Science will always be a huge love for me, but for now writing is taking the forefront!

I’m a mom to Paxon and Apollo and a dog mom to Bulma. I love Wonder Woman, anime, and playing my Nintendo Switch (Breath of the Wild 2 can’t come soon enough). If I’m not finding an excuse to be outdoors, I’m in the kitchen experimenting.

Happy Father's Day ❤️☺️
So grateful that this is my life
On the 13th this little guy was one month old! One month of cuddles, healing, and figuring out how to take care of two boys with very different needs and very different schedules. Despite how tiny he may seem, he's already so strong and his awake and alert times are becoming more and more. 💙
Apollo has landed 🚀
12/11 - Not to rip off a Jim Halpert quote completely BUT... The ugly sweater, courthouse wedding at 7 months pregnant was actually Plan C. Plan B was an overpriced modern wedding at a picturesque venue at the beginning of June but, you know, global pandemic. Plan A was marrying him a long, long time ago. Either when he showed up with flowers and food at my doorstep when I was in college because he knew finals were making me starve myself, when he stayed with me for the ten days and helped me figure it out while I was technically homeless in Pullman, or when he dropped everything in one night and became a dad and has cared for me and our son ever since then - no questions asked. I love you, husband ❤️ #CassOhl
I have so much to be thankful for ❤️ happy thanksgiving 🍁